Brawl in The Great Hall 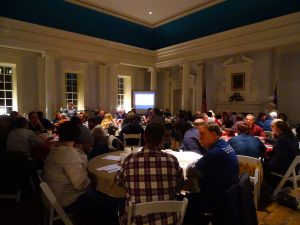 On Tuesday night, February 13th 2018, some may have been worrying about last minute Valentine’s Day plans, but not the staff of The Old Exchange.  Instead they were more focused on who was going to get the next trivia question right in Charleston’s 3rd Annual History Bowl.  The History Bowl is a local trivia contest in partnership with The Powder Magazine, and it is a fun night of competition between several Charleston tour companies and local historic sites.  Contestents included Walking, Ghost, and Carriage tour guides, Teachers from Berkeley and Charleston Counties, local authors from Arcadia and History Press Books, students from the history departments at The Citadel and Collage of Charleston, and representatives from the Charleston History Before 1945 Facebook page.

The Questions this year were:

1. What does AME stand for in the Morris Brown AME Church and the Emanuel AME Church?
2. What visitor to Charleston in the 1830s and 1840s had a first name that was the same as the largest sea island off South Carolina, a middle name that was the same as another sea island off South Carolina, and a last name that sounds like a German highway?
3. What was bootlegger Frank Hogan’s street name?

4. Within one year, what year did Gen. Robert E. Lee first return to Charleston after the Civil War?
5. Name 2 of the 3 ships that left England in 1670 to sail to our colony.
6. True or false: The College of Charleston has never had a football team.

7. The sabal palm was made our state tree in 1939. Which other state also uses it as its state tree?
8. Name two authors who graduated from Ashley Hall and both have Josephine as their first names.
9. What was the name for the annual payment to the Lords Proprietor that allowed land holders in Carolina to fee, own, or bequest their land to others?

There were several ships that attacked Ft. Sumter that were all named for places. Match the ship and the state from which its named is derived:

States (some get used more than once): NJ, MD, NY, Iowa

10. What two countries did Sephardic Jews come from in the 17th and 18th centuries?
11. Who was the “gentleman architect” of Charleston?
12. What was Calhoun Street called originally?

13. How do you spell Edgar A. Poe’s middle name?
14. What College of Charleston baseball player currently is an outfielder with the Yankees?
15. The author of “Uncle Tom’s Cabin” had a brother who took part in the flag re-raising at Ft. Sumter. Name him (first and last names).

16. James Rigney, Jr. wrote seven Conan the Barbarians stories and “The Wheel of Time” using what pen name?
17. Was Gen. Thomas Sumter alive when work started building the foundations for Ft. Sumter?
18. When Thomas Heyward and Edward Rutledge signed the Declaration of Independence, they left a space between their names, anticipating the signature of whom? 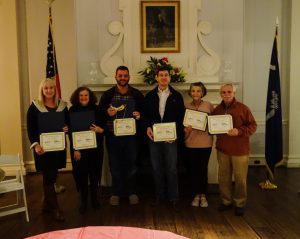 The battle was hard fought, but this year the winners of The Brawl in the Great Hall were the Barking Bulldogs: tour guides representing Bulldog Tours.  Congratulations to them, and let’s see if they can win again next year!

Your ticket for: Charleston History Bowl Takes Place in The Great Hall